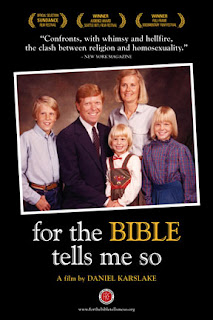 Thanks to my friend Ellen Buddle for reminding me of this incredibly powerful documentary.
For the Bible Tells Me So is an absolutely terrifying and devastating insight into the world of Christian fundamentalism, particularly that of the hard-line evangelical movement, which unfortunately has come to dominate the world's largest religion in the last half-century.
By savagely critiquing fundamentalists' claims that homophobia and Christianity are inextricably linked, For the Bible Tells Me So manages the unique task of being respectful and even, in the end, hopeful, without being sensationalist or cruel. It combines "hellfire and whimsy." What gives this documentary its punch is that it does not interview men like Richard Dawkins or Christopher Hitchens - men for whom the issue of gay rights is of secondary concern to their determination to concede that no good came of religion, ever. The welfare of gay men, gay women, their friends and families is for them nothing more than a convenient float to ride on - or so it has always seemed to me. Instead, For the Bible Tells Me So interviews men and women of the Christian faith from right across the boundaries of opinion and it shows that - as ever - Christianity is very much a broad church, in the truest sense of the word.
I should like to say that my own opinions on homosexuality and Christianity are perhaps known to regular readers. It is baffling to me that some educated persons still consider homosexuality to be a "choice." As if anyone would voluntarily chose a lifestyle which involves an often humiliating "coming out" or the fact that in about 85% of the world you can't do something as simple as walk down the street holding the hand of the person you have fallen in love with, without fear of jeering, humiliation or worse. It is beyond idiotic to assert that anyone "chooses" homosexuality.
The sheer venom and cruelty of fundamentalist homophobia is - as For the Bible Tells Me So points out -  something truly mesmerising and horrifying in its intensity.
Before linking to the trailer, however, I should like to say that although my own views of homosexuality are well-known, there are many men and women of good faith and good conscience who do not agree with homosexuality. I do not agree with them, but I do not dislike them for it. For some, it is simply a belief that the creation and sustenance of human life must properly lie at the root of any fulfilling human sexual or romantic relationship. For others, it is simply the case that the arguments explaining the context of Leviticus and Romans' criticism of same-sex relationships are not convincing enough to explain away their teachings. And, for others, it is based on the feeling that things are changing too much, too fast. Obviously, it is no secret that I disagree; equally, it is no secret that I also think they have every right to hold those opinions. I do not agree that they have the right to legislatively enforce their lifestyle choices on other people, but that is another argument. What we can hope for - indeed, praise - is something which has already happened on the comment sections of this blog - namely a polite and respectful exchange of ideas amongst educated people.
The world that For the Bible Tells Me So is a million miles removed from this kind of atmosphere. It is a disgusting, abhorrent and revolting world, which is happily opposed by men and women of great courage and conviction.
The trailer can be viewed here.
Posted by Gareth Russell at 01:14