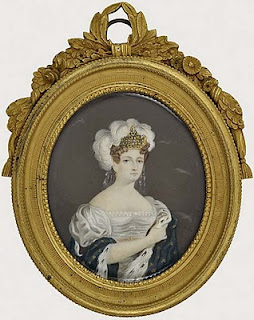 "I thank all the FRENCHMEN who have remained attached to my family and to me for the proofs of devotion that they have given us, for the sufferings and pains they suffered because of us.
I pray God to pour out His blessings on France, which I have always loved, even in the midst of my bitterest afflictions."

The Cross of Laeken marks the anniversary of the death of Princess Marie-Thérèse-Charlotte of France, the only surviving child of Louis XVI and Marie-Antoinette, who died in Austria at the age of seventy-two, three days after observing the 58th anniversary of her mother's execution.

Next week, I will be reviewing Elena Maria Vidal's wonderful novel Madame Royale, based on Marie-Thérèse's later life. For a review of its prequel, based on the marriage of her parents, click here.
Posted by Gareth Russell at 14:14