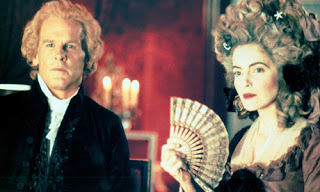 "Are all men created equal, Mr Jefferson, or should this read 'all white men are created equal'?"
So asks a French aristocrat in the 1995 movie Jefferson in Paris, gazing at the ambassador for the new United States with a slightly amused sneer.
Over at The Guardian newspaper, Alex von Tunzelmann reviews the movie, fifteen years after its release, commenting that its two leads "have the sexual chemistry of a pair of recalcitrant pandas." A phrase I found delightfully hilarious. Read the full review here.
Over at Tea at Trianon, novelist Elena Maria Vidal comments on a recent article about how Mr. Jefferson, despite claiming to hate the decadence of pre-revolutionary French high society, was in fact secretly enthralled by it - especially its culinary delights. As always, it's the puritans you need to watch-out for...

"Though disgusted by the excess of Parisian society, Jefferson couldn't help but be drawn to its art, architecture, music, food and wine. A man of contradictions (he was adamantly against slavery yet never freed his 200 slaves), Jefferson socialized with the bourgeoisie and aristocracy, and was known to host lavish dinner parties in his Parisian apartment on the Champs Elysees (Bordeaux was his wine of choice). He employed four French chefs and had his slave, James Hemings, learn the art of French cooking."