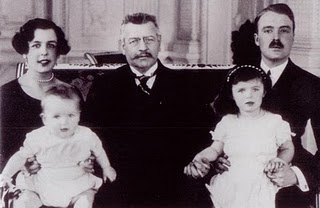 The Press Office for His Serene Highness Albert II, Prince of Monaco and Marquis de Baux has announced with regret that His Highness's aunt, Her Serene Highness Princess Antoinette of Monaco, Comtesse de Polignac and Baroness de Massy, has passed away at the age of ninety in The Princess Grace Hospital.
Princess Antoinette was a prominent activist for animal rights and the chairwoman of Monaco's Society for the Protection of Animals. Her Highness and her late brother, Prince Rainier III, were estranged for many years, however, the siblings were reconciled later in life.
The late princess was the daughter of Princess Charlotte of Monaco, Duchesse de Valentinois and Pierre, Comte de Polignac, a descendant of the legendarily beautiful eighteenth century socialite, Gabrielle de Polignac, a friend of Marie-Antoinette's. She herself was married three times - firstly to the internationally renowed tennis player, Alexandre-Athenase Noghès, with whom she had three children (Elisabeth-Anne, Christian-Louis and Christine-Alix.) In honour of the marriage, her brother created her Baroness de Massy. Unfortunately, the marriage ended in divorce in 1954 and the baroness subsequently married the President of the Conseil National (Monaco's parliament), Dr. Jean-Charles Rey, although this marriage also ended in divorce in 1974. In 1983, she married the British former ballet dancer, John Gilpin, but tragically, he died of a massive heart attack in Monte Carlo only six weeks after the wedding.
Princess Antoinette was sadly predeceased by her daughter, Christine Leroy, who died in the United States in 1989, but she is survived by two of her children - Elisabeth-Anne de Lusignan and Christian-Louis, baron de Massy; five grandchildren, Jean-Leonard, baron de Taubert, Melanie-Antoinette de Massy, Leticia de Massy, Antoine de Massy and Keith Knecht, as well as by six great-grandchildren, Rose and Sylvester de Brouwer and Christine, Alexia, Vittoria and Andrea Knecht.
The Royal Household and the Government of Monaco will observe full mourning for the Princess until April 1st and the funeral of Antoinette of Monaco will be held in Monaco's Cathedral of Our Lady of the Immaculate Conception on March 24th.
Posted by Gareth Russell at 14:33