Has Christopher Hitchens mellowed in his attitude towards Christianity? 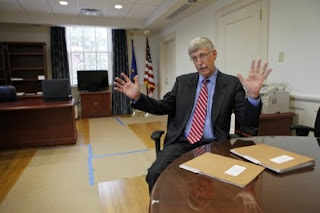 An article in The Catholic Herald notes the unlikely friendship between Vanity Fair journalist and well-known critic of religion, Christopher Hitchens, and the devout Christian scientist, Dr. Francis Collins, director of the National Human Genome Research Institute, whose pioneering techniques on treating cancer are currently being used by Mr Hitchens in his battle against throat cancer. Dr. Collins (above), who is an evangelical Protestant, also won praise for his scientific research's influence upon his faith in Pope Benedict XVI's book Jesus of Nazareth, where he commended the doctor's work in "the magnificent mathematics of creation, which today we can read in the human genetic code, we recognise the language of God”. Collins actually converted to Christianity, which he was not born into, thanks to his scientific research.

It's a moving and well written article. However, I think the story (but not the article) might over-state two things. The first is that Christopher Hitchens has always been much more fair in debates with theists than his more militant colleagues and the second is that unlike Richard Dawkins, Hitchens has never claimed that a lively intellect and, more importantly, scientific brilliance are incompatible with a religious faith. He just happens to believe that a religious faith is a waste of time which, contrary to the hysteria which greets the mention of his name amongst some devout Catholics and fundamentalist Protestants, does not make him a bad person. The idea that all those who profess a religious or spiritual faith are either insane or woefully stupid is perhaps the one I have always found most bizarre. The claim that no atheist regime has ever persecuted believers because of their religious faith, however, remains the most offensive.
I hope Christopher's battle against throat cancer, which he has fought doggedly, is successful. Not simply because of how well he is thought of by so many people but, although I disagree with almost everything he thinks both politically and religiously (his critique of The King's Speech was particularly misleading), he is a brilliant writer with a real way with words and the intellectual world would be poorer for his loss.
Posted by Gareth Russell at 14:09