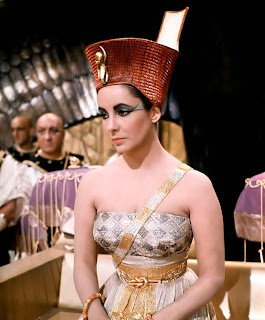 I am planning to write my own tribute post to the late Dame Elizabeth Taylor, who passed away yesterday in Los Angeles at the age of seventy-nine. However, I wanted to quote from, and link to, this beautiful tribute paid to her by American novelist, Christopher Gortner, whose most recent novel has been reviewed by me here. Christopher writes: -

"When I was growing up in Spain during the last years of Franco’s regime, the local movie theatre in the seaside town where I lived played older movies. Censorship was part of Spain’s society in those days, even as Franco’s grip weakened. ilms like The Exorcist were heavily edited or never shown; the result is that I grew up watching movies from the gilded age of Hollywood, like Young Bess; My Cousin Rachel; Rebecca; Scaramoche; Portrait of Jenny; and many others. The stars of the 1940s and '50s were as real to me as those of my own era, often more so, because theirs were the films I was most exposed to.

I’ll never forget the first time I saw Cleopatra with Elizabeth Taylor. The town theatre showed it in its entirety, as they did Gone With The Wind, with 20-minute intermissions. Amidst the crunching of popcorn, perched on worn creaky seats, with the drone of the projector running in the background, I sat, mesmerized, as the screen revealed a world of hot sand and lustrous gold, the likes of which I’d never seen. And when she rolled out of the carpet, her white sheath clinging to those voluptuous curves, her arresting eyes sparking in defiance at Rex Harrison’s equally smitten Caesar, I was hers. I sat utterly still, captivated by the unique combination of beauty, ferocity, and fragility that made Ms Taylor the first true superstar.

... Perhaps it’s my memory of seeing it as a boy, the impact of watching it unfold in all its epic Technicolor glory on the big screen, cementing its iconic imagery in me. Whatever the case, my admiration for Ms Taylor never diminished. Indeed, it only grew as the dark days of the '80s exposed a terrifying foe which killed countless friends. As everyone but the afflicted and warriors fled, she stood up and proclaimed now was the time to join together, instead of seeking someone to blame. The AIDS pandemic changed my life and it changed hers: though we never met, I felt as though I knew her.

Of course, we all feel like that when it comes to movie stars. It’s what they do: they reflect our yearnings. But Elizabeth Taylor was more than a celebrity; in her tumultuous private life and bold humanitarian stance, she demonstrated a quest to live as she thought fit, even if it came at a price. She learned from her mistakes but wasn’t afraid to make them again. She once said, “I don't entirely approve of some of the things I have done, or am, or have been. But I'm me. God knows, I'm me.”

For a boy who once struggled to find out who he was in the world, hers were words to live by."