March 21st, 1556: The Burning of Thomas Cranmer, Archbishop of Canterbury 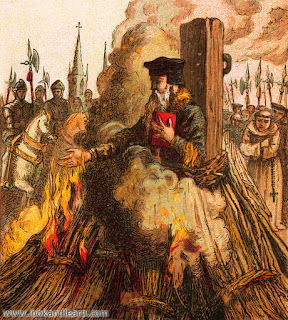 Today is the anniversary of the burning to death in Oxford of Thomas Cranmer, Protestant Archbishop of Canterbury, on the orders of Queen Mary I. As Claire Ridgway writes on The Anne Boleyn Files, Cranmer's execution was technically illegal and therefore an act of tyranny on Mary's part, since he was apparently unable to reconcile his twin devotion to both Protestantism and the Divine Right of Kings. How could Mary be wrong since she was Queen? Therefore he recanted his previous repudiation of Papal authority and that recantation, under English law, was supposed to exempt the penitent from death by burning.
However, the Queen was so consumed with hatred towards the old archbishop for his role in pronouncing her mother's divorce twenty-three years earlier that she insisted the execution went ahead anyway, acting upon the advice of the ultra-conservative Bishop of London, who both doubted Cranmer's sincerity and despised his politics.
On the pyre, Cranmer thrust the hand that had signed his conversion into the flames first, thus sealing his reputation as a Protestant martyr.
For a full account of the execution, you can click on Claire's website.
For Cranmer's earlier association with the Boleyn family, click here.
Posted by Gareth Russell at 12:17