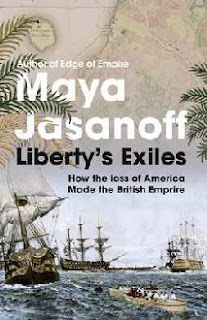 Linda Colley at The Guardian reviews Maya Jasanoff's acclaimed new book Liberty's Exiles: American Loyalists in the Revolutionary World, which chronicles the often untold story of those Americans, both white and black, who chose to remain loyal to the British Crown during the War of Independence. As well as chronicling the often tragic fates of loyalist individuals and families, it is also Jasanoff's contention that the loss of the American colonies may actually, in the end, have facilitated the growth and expansion of the British Empire to the heights reached in the 19th and 20th centuries.

"When war erupted between Britain and its 13 North American colonies in 1775, a fifth (possibly as many as a third) of American colonists, as well as large numbers of indigenous peoples and free and enslaved blacks, had aligned themselves in support of a continuing transatlantic imperial and regnal connection. Many of these loyalists subsequently died in battle, or skirmishes, or from wartime epidemics. Others experienced a catastrophic loss of status, or saw their property confiscated; and some lost much more. Thomas Brown, who had arrived in Georgia from Yorkshire in 1774, refused to join the "rebels" the following year and was promptly set upon by a gang who tortured and almost scalped him. Shadrack Furman, a free black Virginian who worked for the British as a provisioner and guide, was captured by patriot troops, given 500 lashes, and then blinded and rendered mentally deranged by an axe blow to the head. A war involving high political ideals, this was also – as civil wars generally are – bloody, arbitrary and extremely cruel... For a very long time, loyalists were often left out of patriotic American histories of the revolution. Or they were caricatured as upper-class Tory reactionaries, or – rather like the Jacobites – made the subject only of nostalgic antiquarianism. Maya Jasanoff's achievement in this vivid, superbly researched and highly intelligent book is skilfully to weave together and supplement a mass of recent revisionist research on these men and women, and to analyse their complex roles and significance in the imperial and global history of the late 18th and early 19th centuries."

It sounds like a really fascinating story and it's definitely on my list of books to buy!
Posted by Gareth Russell at 19:27