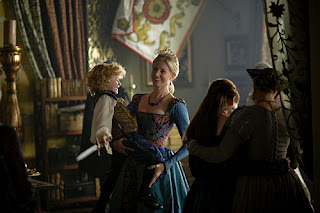 Above: British actress Joely Richardson as Katherine Parr in Series 4 of The Tudors.
Concluding her excellent series on the reputations of Henry VIII's six wives, Claire Ridgway mounts a rousing defence of his final queen, Katherine Parr (1512 - 1548.)

"In the final part of our Six Wives’ Stereotypes series we look at a wife who I would say has been more ignored and misrepresented than maligned. When I did a project on Henry VIII and his six wives when I was 11, I thought that Catherine Parr was nothing but a glorified nursemaid, a nurse with a crown and jewels as a perk. I imagined her tending the obese, bad-tempered and ill King, mopping his brow and whispering soothing words of comfort to him. A woman who made his last years more comfortable and who humoured him. How wrong I was. Just last weekend I was watching “The Tudors” and there was Queen Catherine Parr applying a poultice to Henry’s leg ulcer, although I am pleased to say that they have also made Henry’s sixth wife glamorous and intelligent so I might let them off!"

For Katherine Parr's position as the first English Queen of Ireland, click here.