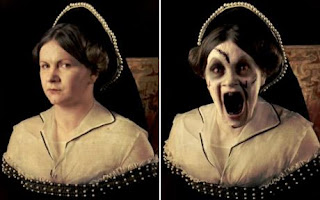 A lurid and frightening poster advertising the London Dungeons' forthcoming exhibition on the religious persecutions during the reign of Queen Mary I (r. 1553 - 1558) has been banned in London, after parents complained it was frightening their children. Understandably. Mary, who was the only child of Henry VIII and his first wife, Katherine of Aragon, earned the nickname "Bloody Mary" in the years after her reign, thanks to her government's systematic persecution of Protestant-Christians and religious dissenters.

The poster (above), which shows the 16th-century monarch transformed into a hideous zombie, plays to the old and inaccurate idea of Mary as being a psychotic and evil woman and it has understandably raised the heckles of not only the angry mothers of London, but also the biographers and historians who have recently been working on re-assessing Queen Mary's life and legacy.

I have an uneasy relationship with Catholic revisionism about this period in English history and this poster highlights the reasons why. On the one hand, it is both tasteless and absurd to have Queen Mary displayed as demonic zombie and it is a very good thing that historians are objecting to it. Recent work by people like Linda Porter, David Loades and Anna Whitelock have finally helped put Mary in her proper historical context: she ruled in an age when religious persecutions were the norm. Through their work, these excellent writers are finally beginning to make headway in persuading the reading public that Queen Mary was not so much evil as essentially misguided, as well as being highly capable in other areas of her life and reign.

However, the post on historian Stephanie A. Mann's excellent blog Supremacy and Survival about the poster controversy, raises why I am also uneasy about it. The noted historian, Leanda de Lisle, defends Queen Mary: -

“It really is an example of England’s knee-jerk anti-Catholicism and how our history of the Tudor period has been distorted by post-Reformation propaganda. What about Elizabeth? People may be aware of the executions of Catholics, but there were many more people. After the 1569 northern rebellion, Elizabeth ordered that a man was to be hung in every village associated with the rebellions. It was on a similar scale to her father."

Elizabeth ruled for forty-five years, compared to Mary's five, but de Lisle's point is a thoughtful one and a sensitively made one. However, in other arenas, the policy of trying to tear down Lady Jane Grey or Elizabeth I's historical reputation in order to rehabilitate Mary's is indicative of a worrying trend in English revisionist histories. Catholicism's past mistakes are now judged as products of a turbulent century; Protestantism's as the systematic cultural rape of Albion. 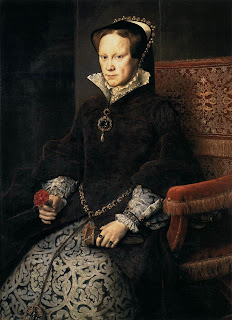 The portrait which inspired the poster: the real Queen Mary Tudor, painted by Antonio Mor, towards the end of her life (c. 1557)

For example - and this is a semi-frivolous point - there is a group on Facebook called "The English Reformation was a crime against humanity." The historian in me feels slightly ill when I see something like this. Worse, it comes from exactly the same school of thought which insists the Inquisition should be judged solely based on the context of its time. Namely, the Inquisition was a product of the 16th century's mentality towards dissent, but the Reformation was a "crime against humanity"? One cannot have it both ways, but alas, many try and try too hard and in doing so undermine their other, worthier points.


Professor J.J. Scarisbrick, one of Henry VIII's finest biographer, said it best when he said that the pendulum has swung too far in the Catholic direction of things when it comes to 16th century English historiography and that one day it will swing back to the pro-Protestant version of events, in which everything that happened to England's church in the 16th century was seen as more or less a good thing. That is the nature of historiography.


It's unfortunate, however, that a balance cannot be found somewhere over the thorny issues of England's Reformation and Counter-Reformation. As we do with the six wives of Henry VIII, we're still tempted to play favourites with the Tudor royals, constantly comparing them to one another and competing them with each other in our mind's eyes, like preferential parents trying to pick favourites out of a bunch of particularly precocious children. Leanda de Lisle, who has written excellent books on the Grey sisters (one of my favourite reads), amongst other things, makes the point that Mary and Elizabeth both saw a link between religious dissent and political disobedience. But there are, I think, differences. Elizabeth had just faced a rebellion and she targeted - with appalling savagery - the key geographical area which had created the rebellion. It was only later, when the Pope made the disastrous and unforgivably stupid decision of excommunicating Elizabeth, that English Catholics found themselves in hot water with their government - a situation which many endured with dignity, grace and loyalty to the Throne. Whilst Queen Mary had faced a rebellion, her persecution of Protestants was nothing to do with Wyatt's failed uprising of 1554. It was a sustained theological policy, something which Elizabeth's government did not have until the crisis of the excommunication later in the reign.


Both sisters' actions, however deplorable to us today, were very much a product of their time and they should be judged as such. I tend to think Mary's religious policy was more misguided than the recent work of writers like the great Eamon Duffy suggest and it's only by balancing Mary's failures in the balance with Elizabeth's successes can we explain why Protestantism eventually "won" in England.


The London Dungeon poster should be banned. It's garish and horrifying for young children, but it's also an unfair demonisation of a queen who presided over five years of successes and failures, and who proved that a woman could rule in her own right, despite her late father's hysterical protestations to the contrary. Whatever one might think of Mary's reign, she always strove to do what she believed was the right thing. She deserves a fairer treatment by historians and that includes looking at Mary as a whole - highs, lows and everything in between - and realising that, at long last, we have to start looking at her as an independent figure and not continuing to play the game of comparisons with her younger sister.
Posted by Gareth Russell at 20:49