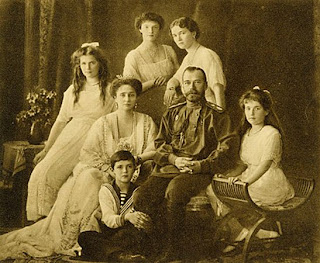 "The decision was not only expedient but necessary. The severity of the summary justice showed the world that we would continue to fight on mercilessly, stopping at nothing. The execution of the Tsar's family was needed not only in order to frighten, horrify, and dishearten the enemy, but also in order to shake up our own ranks to show that there was no going back."
- Leon Trotsky (1879 - 1940)

"With the saints give rest, O Christ, to the soul of your servant where there is neither pain, nor sorrow, nor suffering but life everlasting."
- A Russian Orthodox prayer for the dead, contained within the last Church service the Romanovs ever attended on Sunday July 14th 1918. The officiating priest, Father Storozhev, reported that the Tsar's daughters had tears in their eyes as they said the prayer.

Today is the 92nd anniversary of the execution of the Imperial Family of Russia by their Communist captors, acting on the orders of Vladimir Lenin and the Moscow Soviet, in 1918.

I had wanted to blog about this terrible event in detail, but with several writing deadlines, I unfortunately do not have the time to do it justice. So, I shall return to the topic next year. However, one thing occurred to me recently and I would like to share it today, since it is particularly relevant.

The Emperor and Empress's second daughter, Grand Duchess Tatiana, was the tallest and most beautiful of the four Romanov sisters. A courtier, who knew her, said: "One never forgot she was the daughter of an Emperor." It is clear from the horrific physical wounds revealed by the examination of Tatiana's remains and the memoirs of those who helped kill her that she used herself as a sort of human shield, to protect her two younger sisters, during the first and second hail of bullets fired upon the family.

It is clear however that Tatiana died, eventually, from a single bullet wound to the head. Yakov Yurovsky, who was in charge of the execution that night, delivered the fatal gunshot and he recorded that as he marched towards her, Tatiana struggled to her feet from the corner where her eldest sister lay dead, her youngest lay unconscious and another lay in hysterical convulsions after sustaining a bullet wound to the leg. It is often assumed that Tatiana was attempting to run away from her executioner - a perfectly natural assumption, but one which Yurovsky himself did not suggest. There was, in fact, nowhere for her to run. She was backed into a corner - the bodies of her parents and eldest sister were in front of her, her two youngest sisters were cowering in a corner behind her and there were eleven men (so to speak) blocking the only exit from the cellar. Moreover, Yurovsky does not record her attempting to move, but rather pulling herself to her feet, using the blood-soaked wall for support.

The Grand Duchess chose to die standing. Death was coming and rather than weep on her knees in the corner, she hauled herself to her feet. She was relatively calm, under the circumstances, as Yurovsky fired a bullet through her head. And it is perhaps the perfect way to look at the disgusting, hideous massacre of Ekaterinburg. Those who were degraded were not the bleeding or the dying, the sobbing or the maimed, but those wielding the guns.

The firing squad revealed in that moment what Communism would mean to the people of Russia, what it would mean thirty million times over in the century to come. Thomas Jefferson once said that, every now and then, the “tree of Liberty” needed to be watered by a little blood. Perhaps he would not have been so quick to say something so stupid if he had seen what transpired in the name of progress in the early morning hours of July 17th, 1918. Then again, he might have been. The future President said those words as the streets of Paris were almost literally running with the blood of those who had not embraced the French Revolution. Why should Mr. Jefferson have felt any more charitably about those who perished a century later in Russia?

Needless to say, I am not one of those people who think Thomas Jefferson was a genius, nor am I one of those people who think that an ideology, however grand or however pleasing its platitudes of equality, merits being watered by the blood of innocent people. Instead, I prefer to take heart from the image of a 21 year-old princess, clawing herself to her feet, to face Death with a courage that shamed that of the "brave" Communist soldiers who were currently hacking her family to pieces.
Posted by Gareth Russell at 16:38