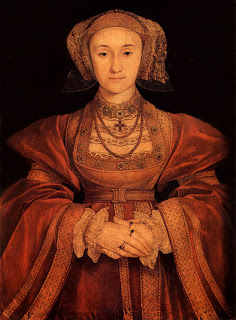 On this day in 1557, seventeen years after her divorce from King Henry VIII, Anne of Cleves, the former Queen of England, died at the relatively young age of 41 at Chelsea Old Manor, a palatial country home - one of many which the wealthy ex-queen enjoyed as part of her generous divorce settlement, which left her financially and socially secure as an honorary member of the English Royal Family.

Following the advice of her former stepdaughter, now Queen Mary I, Anne had converted to Catholicism and it was in that religion which she died. Given that the brand of Protestantism her family in Germany had professed during Anne's childhood was relatively mild in its reformist sympathies, it is unlikely that it was too much of a trauma for Anne to convert to "the Old Religion." Equally, it is highly unlikely that the conversion would have happened at all if Anne had not guessed correctly that it was what the new Queen wanted. Either way, she died a Christian and a happily practising one, at that.

The former Queen had been in poor health for most of the Spring and had dictated her Last Will and Testament to her lawyers some months earlier. (In her book on Henry's queens, Lady Antonia Fraser offers the reasonable hypothesis that the cause of Anne's death was probably cancer.) The princess left some bequests to her family in Germany - mainly to her brother, the Duke of Cleves, and her sister, the Duchess of Saxony - as well as to some English friends, including Mary, Duchess of Norfolk and Catherine, Countess of Arundel. The majority of her jewellery collection she left to her two former stepdaughters, Queen Mary and Princess Elizabeth, the Heiress Presumptive. All of Anne's land and palaces reverted to the Crown, from whence they had came.

Anne of Cleves was the last of Henry VIII's famous tribe of wives to die and she was also the only one to be honoured with a burial in the English monarchy's most prestigious sacred site - Westminster Abbey. Katherine of Aragon rests in Peterborough Cathedral, near the site of her final exile; Anne Boleyn and Catherine Howard are buried beneath the high altar of a chapel adjacent to the site where they were both slaughtered; Jane Seymour rests at Windsor Castle and Katharine Parr in the ancestral home of her fourth husband.

Today, the tomb of Anne of Cleves is somewhat difficult to find for the casual tourist, but it lies near the shrine of the Saint-King, Edward the Confessor. Had her marriage to Henry VIII lasted longer, she might one day have been crowned near there too, but the diadem had passed to young Catherine Howard, with tragic results.

Anne had been married to Henry VIII for the shortest period of time - barely six months between marriage and divorce. Her story lacked everything which gave those of Henry's other queens their posthumous sparkle. Equally, her personality lacked the determination and the flamboyance which had made Katherine of Aragon and Anne Boleyn great women. Both of them were, without doubt, titans of the 16th century monarchy, whatever one might think of their respective achievements. Nor did Anne have Jane Seymour's good luck in bearing a child to seal her reputation or the unfortunate sex appeal of Catherine Howard. However, Anne of Cleves' true achievement rests in something rather different, more mundane but perhaps not much less admirable.

Put simply, Anne of Cleves was a nice person. Nice women do not make history. Good women can, great women certainly can. Nice ones? Unfortunately not. Neither Katherine of Aragon or Anne Boleyn were "nice" women. They were both capable of great kindness and they were often seen as heroines by those around them, but to call either of them "nice" would be to woefully misapply the word. Katherine of Aragon's obscene exultation over the dead body of the King of Scots when he dared invade her husband's realm or Anne Boleyn's utter indifference to the fate of Sir Thomas More are not the qualities of nice women. Katherine of Aragon and Anne Boleyn were, however, both great ladies - courageous, determined, principled, charismatic and, as one historian so rightly put it, "worthy adversaries." "Nice" is far too twee a word for either queen.

But, if nice women do not necessarily make history, they can make peoples' lives happier and both of Anne of Cleves' stepdaughters, Mary and Elizabeth, would have been unanimous in their praise of their father's fourth wife. It is nothing to be sniffed at and in a century which perhaps produced too many great men and women for its own good, the niceness of Anne of Cleves is to surely to her eternal credit.

Perhaps the most appropriate epitaph for the one-time Queen of England was the assessment offered by the Earl of Southampton when he met her for the first time: "None might be more amiable, nor more like a princess."
Posted by Gareth Russell at 22:37