New investigation into a portrait of an unknown "English Princess" (c. 1535) 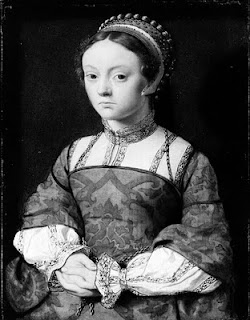 "Back in the 1920s a portrait of a young woman was sold to Jules S. Bache in New York as 'English Princess', with the implication that the sitter was Mary. The portrait is by a unidentified Netherlandish artist and has been dated to about 1535."

A portrait painted in the mid-1530s and currently in the possession of the Metropolitan Museum of Art, NY, is being re-examined to authenticate or dismiss claims made in the early 20th century that it was the future queen, Mary Tudor, eldest daughter of King Henry VIII and Katherine of Aragon.

Little Miss Sunnydale, whose blog Mary Tudor: Renaissance Queen is one of the best on-line sources for Mary Tudor's life and reign, is rightly dubious about the claims that the portrait must be Mary. It's precisely this kind of wild excitement about the Tudors which means that every time a "new" portrait emerges, people immediately assume, hope or insist that it must represent a member of Britain's most famous ruling family.

In the past, two sketches by the great Hans Holbein have (ludicrously) been labelled as likenesses of Anne Boleyn, despite the fact that neither tallies with contemporary descriptions of the Queen, nor is either sitter in sufficiently grand costumes. The same is also true of the Horenbout miniature painted in the middle of the 1520s, which is far more likely to be a member of Anne's extended family. (At other times, it's also been suggested that the miniature represented Katherine of Aragon or Jane Seymour, both equally unlikely.) Equally, a portrait which is too-often described as a painting of Henry VIII's fifth queen, Catherine Howard, is in fact far more likely to be Jane Seymour's younger sister, Lady Elizabeth Cromwell. We seem to forget that a host of other aristocrats and minor members of the Royal Family sat for portraits in the 16th century, not just the galaxy of ill-fated royal celebrities that subsequent generations became so obsessed with. 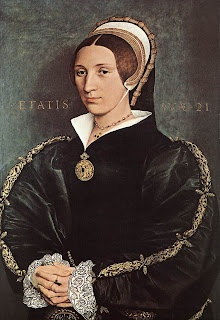 A portrait by Hans Holbein which has mistakenly been identified as Queen Catherine Howard (?1524 - 1542), Henry VIII's fifth wife. In fact, it is far more likely to be a painting of Lady Elizabeth Ughtred-Cromwell (?1511 - 1563), younger sister of Queen Jane Seymour.


Even if the claim made in the 1920s that the Metropolitan's mysterious portrait is an English princess is accurate, there were several other possible candidates than Mary, who was in disgrace in 1535 and therefore unlikely to have been painted at all. Of course, it is very possible that the portrait could date from earlier in the decade than 1535, or later, in which case Mary would have been likely to sit for a portrait. However, the gown is simple and the sitter is not wearing any jewellery, something which does not sit with what we know of Mary Tudor's lavish tastes.

The girl in the painting could have been one of Mary's half-royal cousins - Lady Margaret Douglas, daughter of the Queen Mother of Scotland, Frances, Marchioness of Dorset or Lady Eleanor Brandon. All three could, just about, be described as "English princesses" by an overzealous art-seller - after all, they were all the granddaughters of a King and the daughters of former queens.

Of course, it's just as possible that it's no-one related to the Royal Family, but rather a courtier or member of the minor nobility, whose name we may never know. If it is someone attached to the Tudor family, my money is on Lady Margaret or one of the Brandon sisters, not the future Queen.