Sixteen Nuns Slaughtered on the Steps of the Guillotine 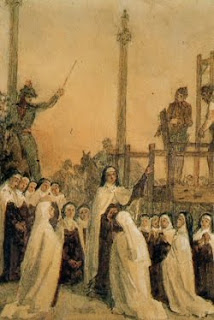 "I learned from a person who was a witness to their martyrdom that the youngest of these good Carmelites was called first and that she went to kneel before her venerable Superior, asked her blessing and permission to die. She then mounted the scaffold singing Laudate Dominum omnes gentes. She then went to place herself beneath the blade allowing the executioner to touch her. All the others did the same. The Venerable Mother was the last sacrificed. During the whole time, there was not a single drum-roll; but there reigned a profound silence."
- The Superior General of the Sisters of Charity of Nevers (1794) writing of the execution of sixteen Carmelite nuns by the French Republic

Despite having promised universal equality and freedom of religion, in 1794, during its official "Reign of Terror," the French Revolution ordered the execution of sixteen Carmelite nuns, the day after their Order's high feast day - the Feast of Our Lady of Mount Carmel. The evidence used to bring the nuns to the guillotine was a picture of the Sacred Heart of Jesus, a devotional device beloved by French Catholic royalists. An image of the Sacred Heart was found within their convent and was thus "proof" of their treasonous intentions against the new Republic.

The nuns were executed showing commendable bravery, singing hymns and kneeling to receive the blessing of their Reverend Mother, who was beheaded last. The crowd watching was mostly silent, out of respect, save for a few zealous republicans in the front rows. Not since the execution a few months earlier of the late King's sister, 29 year-old Princess Elisabeth, had the Parisian crowd seen such a heroic and deliberately Christian death. (The Princess had led the other dozen or so people sentenced to die with her in prayer, including a condemned mother and her son, as they mounted the steps of the scaffold. Like the nuns, who bowed before their Reverend Mother, those sentenced to die before the Princess, bowed or curtsied to her, as she was forced to sit next to the guillotine and watch them die, before she herself was beheaded.)

The blog Laudem Gloriae recounts the story of the Carmelite sisters' death, which I came across via Tea at Trianon.
Posted by Gareth Russell at 22:43