The Sexualisation of Anne Boleyn 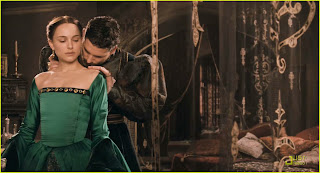 Claire Ridgway at The Anne Boleyn Files criticises the over-sexualisation of Anne Boleyn's story in the modern media.


"It angers me that nearly 500 years on she is still being presented as the woman who tempted Henry away from his wife and beloved church, and a woman who even considered incest to keep her man and crown. Even some Anne Boleyn fans are presenting her as some kind of trophy wife, like a modern day footballer’s wife or celebrity. Others present her as a tragic heroine, a victim of a husband who sought revenge after being bewitched by her. Sometimes it seems that we haven’t moved on from the views of the likes of Chapuys, who called Anne “the Concubine” ... Why oh why do some authors and directors have to make it so that her rise to Queen was based solely on Henry’s sexual infatuation with her and her dangling her virginity as bait? It’s almost akin to people slurring a woman company director by saying that she only got to that position because she slept with influential people or because she’s sexy. Anne Boleyn is not the only victim. Elizabeth Woodville is often portrayed as a woman who used her descent from the mythical Melusine and her knowledge of witchcraft to trap Edward IV and to further her family. Marie Antoinette is depicted as a woman with a voracious appetite for both sexes. Eleanor of Aquitaine was so hot-blooded that she left her frigid husband, Louis VI, for Henry II, and had previously had an affair with her uncle... Alexandra, a member of the History Police group, summed up my feelings on this issue well when she commented on Boudicca, saying, “I think Boudicca was sexy because she was powerful, not powerful because she was sexy”. We are doing historical characters a grave injustice when we credit their success and power to sex and their sex appeal."