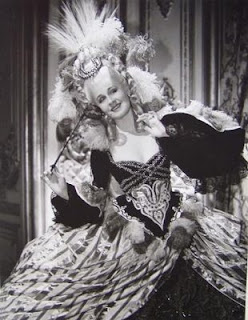 "Although Carnival did amuse me a great deal, I agree that it was time it was ended. We are now back to our usual routine....It is true that I take some care of the way I dress; and, as for feathers, everyone wears them, and it would be extraordinary not to wear them. Their height has been much curtailed since the end of the balls...."

- A letter from Marie-Antoinette (aged 19) to her mother, the Empress, in the aftermath of Mardi Gras, 1775

As a young woman, Marie-Antoinette was well-known for her love of parties and the exhausting social whirl of life in French high society. At the age of nineteen, the young queen was able to experience the joys of Mardi Gras in Paris for the first time, where she and her coterie of like-minded friends had already come to be regarded as a sort of "it" crowd for their generation. At least, for the time being. Marie-Antoinette's mother, the Empress Maria-Teresa, disapproved of her daughter's hectic social life and love of fashion and, indeed, Maria-Teresa seemed to disapprove on principal with anything that caused Marie-Antoinette joy outside of a chapel. Or the still-empty nursery, of course. Any time spent by Marie-Antoinette away from trying to have a baby as soon as possible was, as far as Maria-Teresa was concerned, practically insulting.
However, it would be wrong to paint Marie-Antoinette as a frivolous and graceless bimbo, eschewing responsibility to prance across the Parisian party stage like a stumbling, self-obsessed dilettante. My friend Coco's mother, Deonne, has a wonderful saying: "True class is making other people feel comfortable." And that is a gift that Marie-Antoinette had in abundance. She spent much of her time during Mardi Gras and the balls, festivals, banquets, firework displays and festivities thrown in Paris and at Versailles checking to see that her husband and guests were enjoying themselves.
After Mardi Gras, of course, came the beginning of Lent and it was a season of renunciation taken very seriously at Versailles, particularly by Louis XVI, who was very devout. Having been raised in a strongly Roman Catholic environment as a child, Marie-Antoinette was also scrupulous in observing the dietary and devotional laws mandated for Lent by her priests and confessors and although it was not until later in her life, when she was in her thirties and had become a mother, that she was to become truly devout, she was always a faithful Catholic, even in her younger days.
Novelist Elena Maria Vidal, the author of the novel Trianon based on Louis and Marie-Antoinette's marriage,  (you can read my review of Trianon here), profiles the young queen's love of the Carnival season.
Above: American actress Norma Shearer in her Oscar-nominated role in Marie Antoinette (1938)
Posted by Gareth Russell at 00:13