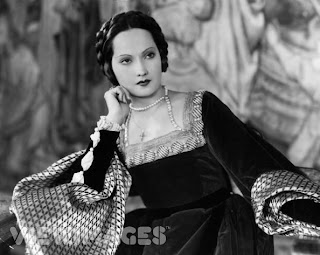 Above photograph: Actress Merle Oberon as Anne Boleyn in the movie The Private Life of Henry VIII (1933)

"Beautiful she is, sir! Lovely! Sometimes like a great tree in flower, sometimes like a white daffadowndilly, small and slender like. Hard as di'monds, soft as moonlight. Warm as sunlight, cold as frost on the stars. Proud and far-off as a snow mountain, and as merry as any lass I ever saw with daisies in her hair in springtime."