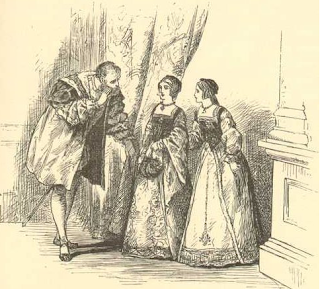 "So much the more
Must pity drop upon her. Verily,
I swear, 'tis better to be lowly born,
And range with humble livers in content,
Than to be perk'd up in a glistering grief,
And wear a golden sorrow."
- William Shakespeare's "Henry VIII," Act II, Scene III


With the Court still adjusting to the news that four of their rank had been condemned to death on the spurious charge of being the Queen's lovers and with many mourning the fates of Henry Norris and Francis Weston in particular, the government moved through Sir Edward Baynton, the Queen's Chamberlain, to notify her household that their services were no longer required. They could go home; the Household of Queen Anne Boleyn was no more. It had been formally disbanded by order of His Majesty the King. It had been eleven days since the Queen had been plucked from amongst her servants, dressed in crimson and gold and jewels, surrounded by sobbing retainers still clutching the silver plates from which Her Majesty ate; it had been eleven days and she would not be coming home.
So, the ladies and the grooms, the priests, the shoe-makers, the milliners, the seamstresses and musicians, poets, tutors, scholars, jesters, fools, stable-hands, cooks, valets, ushers, guards, maids and laundresses returned to their homes. The Queen they had served was no more; the Queen they would serve, officially, did not yet exist.
Of course, many left the palace only temporarily, for careers had to be made no matter who sat upon the consort's throne. Most would be back within three weeks to serve the new queen, Jane Seymour. Some, of course, would never return - the Queen's Mistress of the Wardrobe, Lady Margaret Lee, went into retirement and Mary Wyatt, Katherine Knollys, the Countess of Ormonde, the Countess of Worcester, the Dowager Duchess of Norfolk, Viscountess Rochford and the Duchess of Richmond would all be absent from Court, either permanently or for a prolonged period of time.
It had been a place of gaiety and decadence - a place in which religion and politics had mixed with luxury, art, fashion and music. Some of the most graceful and lovely flowers of the English and Hibernian nobilities had been amongst its constellation of players and so too had some of the most ambitious, duplicitous and malign. Handsome men and ruthless men had haunted its corridors, its ballrooms and its audience chambers - some now awaited death on Tower Hill for having come too close, whilst some of their fellow-revellers arranged the details of their executions.
As the world Anne Boleyn had created fell away and her falcon crest was hacked from the walls of her rooms, the unseen spirit of the not-dead queen haunted the rooms where she had once presided over a court legendary for its extravagance. It was a world where she had danced, chatted, gossiped, schemed, loved, laughed, hated, prayed, wept, made up her face, chosen her clothes, dined with friends and bestowed alms and now it was being erased, like some form of materialist exorcism, to make the rooms ready for her successor, waiting seven miles down-river in Surrey.
In these rooms, Anne Boleyn had been the arbiter elegantiarum , the First Lady of a society saturated in artifice and extravagance and until the days of Henrietta-Maria a century later, Britain would not see her like again. It was this world of aristocrats and palaces and courtiers and hyperbole that Anne Boleyn knew and knew well. In fact, it was the only one she had ever known; it was everything she knew. And she was one of the upper-class's brightest stars, even before the crown was placed upon her head. "The fair rose of state," was how one priest described her, "and the most observed of all the observers."
It was an environment too well-trained in the subtle and deadly poisons of gossip and flattery and in these rooms, upon this throne now being re-upholstered for her rival, Anne Boleyn had sat with the confidence of an empress, surrounded by the dizzying, intoxicating incense of idolisation. When such allurements were deployed against queens who were, by nature, nothing more than celebrated mediocrities, either in terms of intellect, virtue or personality - women such as Anne Neville, Jane Seymour or Catherine Howard - then the effect could be potent, exacerbating what was worst in their characters. For Anne Boleyn, already used to compliments, to attention and to adoration, the effect had simply been to expand those elements of her character which had made her such a success in the courts of Paris and London as a young woman. It had also, however, nurtured her vanity and fed her habit of command.
She had surrounded herself with socialites and priests, poets and philosophers, rogues and prudes. Evangelicals had knelt as she passed and wept, proclaiming her to be the new Deborah, the new Esther, God's Nymph; ambassadors had leaned in to present her with gifts and assure her that their masters sent nothing but the very best of wishes; petitioners and peasants had kissed the hem of her skirt as she passed; poets and musicians had sighed in the most exquisite agony to receive so much as a glance from her and women in silks and diamonds and pearls whispered delicious intrigue in her ears.
On May 13th, that world which historian Neville Williams called "an extravagant, fairy-tale domain of make-believe," vanished to be made ready for the arrival of Jane Seymour. Many of the old actors would return, but the script and the star would, from now on, be very, very different.
Posted by Gareth Russell at 00:03