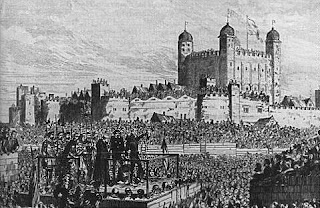 "Death is but crossing the world, as friends do the sea; they live in one another still. For they must needs be present, that love and live in that which is omnipresent. In this divine glass they see face to face; and their converse is free, as well as pure. This is the comfort of friends, that though they may be said to die, yet their friendship and society are, in the best sense, ever present, because immortal."


The Queen – and God knows what state she must have been in by the end of May 17th – was back in her apartments by the afternoon and there are no records of how she spent the rest of the day. Given what she had just witnessed, she was almost certainly in a state of what we would now recognise as shock
As Wyatt wrote and the Queen wept, the city buzzed with the news of what had just happened. In Vienna, the Empress Isabella heard later that the bodies of Mark Smeaton and William Brereton were quartered and displayed around London, to advertise their hateful treachery in violating the Queen. Perhaps the Empress’s informers were correct, but if they were, at some point the heads at least must have been returned to the Tower for burial in the same churchyard that Henry Norris and Francis Weston now lay in. It was a poor and ignoble resting place for such men - particularly Henry Norris. As an aristocrat, George Boleyn’s body was taken into the Chapel of Saint Peter-ad-Vincula and interred beneath the High Altar where, forty-eight hours later, his body would be joined by that of his royal sister.
It had been a grim, hideous, bloody day even in the long grim, hideous and bloody reign of Henry VIII and it is not difficult to see, when one considers the dark, terrible and repugnant events of May 17th, why Charles Dickens would later describe Henry VIII as a spot of blood and grease on the pages of English history. For the Queen, all that was left now was to die and die well.
(A shortened but emotive dramatisation of the executions is available below. It omits the speeches and the character of Sir Francis Weston, but it is primarily worth watching for the phenomenal performance of Natalie Dormer as Anne Boleyn and Jamie King’s voice-over as Sir Thomas Wyatt. It comes from the 2008 Showtime series, The Tudors.)
Posted by Gareth Russell at 02:25