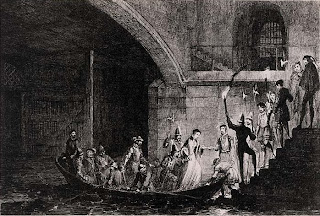 "And down the river's dim expanse
Like some bold seer in a trance,
Seeing all his own mischance --
With a glassy countenance
Did she look to Camelot.
And at the closing of the day
She loosed the chain, and down she lay;
The broad stream bore her far away,
The Lady of Shalott."
- Alfred, Lord Tennyson (1809 - 1892), The Lady of Shalott