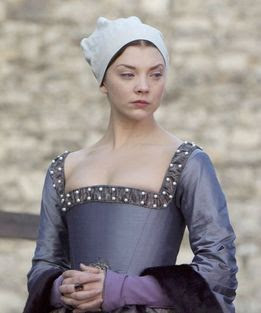 "When I use a word," Humpty Dumpty said, in a rather scornful tone, "it means just what I choose it to mean - neither more nor less."
"The question is," said Alice, "whether you can make words mean so many different things."
"The question is," said Humpty Dumpty, "which is to be master - that's all."
- From Through the Looking-Glass, and What Alice Found There by Lewis Carroll (1832 - 1898)

Above photograph: Actress Natalie Dormer as Anne Boleyn in the television series The Tudors (2007 - 2010)

"My lords, I do not say that my opinion ought to be preferred to your judgement; but if you have reasons to justify it, they must be other than those which have been produced in court, for I am wholly innocent of all matters of which I have been accused, so that I cannot call upon God to pardon me.

I have always been faithful to the King my lord; but perhaps I have not always shown to him such a perfect humility and reverence as his graciousness and courtesy deserved, and the honour he hath done me required. I confess that I have often had jealous fantasies against him which I had not wisdom or strength to repress. But God knows that I have not otherwise trespassed against him.

Do not think I say this in the hope of prolonging my life, for He who saveth from death has taught me how to die, and will strengthen my faith.

Think not, however, that I am so bewildered in mind that I do not care to vindicate my innocence. I knew that it would avail me little to defend it at the last moment if I had not maintained it all my life long, as much as ever Queen did. Still the last words out of my mouth shall justify my honour.

As for my brother and the other gentlemen who are unjustly condemned, I would willingly die to save them; but as that is not the King's pleasure, I shall accompany them in death. And then Afterwards, I shall live in eternal peace and joy without end, where I shall pray to God for the King and for you, my lords.

The judge of all the world, in whom abounds justice and truth knows all, and through His love I beseech that He will have compassion on those who have condemned me to this death."

With that, she rose from her seat and left the room, accompanied by the same delegation with which she had entered. This time, the Yeoman’s axe was turned towards her and she left the Hall, before an audience of thousands, a condemned Queen.
Posted by Gareth Russell at 23:01