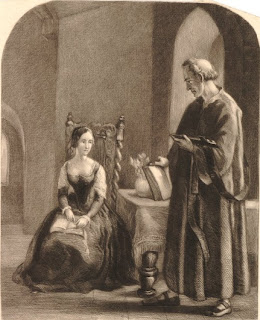 "Of body small,
Of power regal,
She is, and sharp of sight;
Of courage hault,
No manner fault
Is in this falcon white."
- A ballad for Anne Boleyn's Coronation, written by Nicholas Udall (1504 - 1556), Headmaster of Eton College

I would like to apologise for the day-long delay in getting the May 7th post up. Yesterday was my birthday supper and I spent the day in the kitchen cooking a steak and guinness pie, followed by malteser and toblerone cheesecake, with a few friends - Kerry, Lucy, Natalie, Dean, Grace and Aisleagh - stopping by at 7:30. It all turned out very well, so I was very pleased, and like the Queen of England 474 years earlier, on May 7th I had "a great dinner". Unlike her, however, that was because of the company, not despite it!