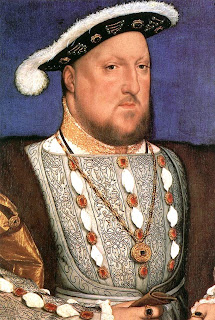 "I saw a royal throne where justice should have sit,
But in her stead was one of moody, cruel wit.
Absorbed with righteousness as of the raging flood;
Satan in his excess sucked up the guiltless blood."
- Anne Askew, Protestant martyr (1521 - 1546)


On the morning of May 16th 1536, Sir William Kingston, Constable of the Tower of London, arrived at the Palace of Whitehall for an audience with the King. Being one of the few people allowed into the King's presence during the period of his wife's imprisonment, the Constable made his way through the opulent and recently re-furbished corridors of the palace which had once belonged to Cardinal Wolsey and then to Anne Boleyn. If ever there needed to be a more potent reminder of the turning of Fortune's wheel, then it lay in the gilt and marble corridors of Whitehall.
As Kingston was escorted towards the Royal Apartments, he must have noticed that the palace was quieter than usual for a Tuesday morning. There were two reasons for this eerie quiet - the first was that with the disbanding of the Queen's Household three days earlier, her two hundred or so servants were now "at liberty to seek service" elsewhere. Secondly, upon hearing news of the Queen's condemnation on the previous day, the rest of the courtiers knew that there was absolutely no chance of her being restored to favour and dozens were now journeying to Chelsea to pay their respects to Jane Seymour and her family. Crowds of spectators had also been travelling to wait at the gates of the former London home of Sir Thomas More, in the hope of catching a glimpse of the woman who everyone expected would soon be their new queen. One of the courtiers also brought a gift and a letter to Jane from her royal lover, informing her that Cromwell had still not apprehended the pamphleteers mocking their impending marriage. If anything, the Queen's extraordinary performance at her trial the day before had only made matters worse: -

"My dear friend and mistress,

The bearer of these few lines from thy entirely devoted servant will deliver into thy fair hands a token of my true affection for thee, hoping you will keep it for ever in your sincere love for me. Advertising you that there is a ballad made lately of great derision against us, which, if it go abroad and is seen by you, I pray you pay no manner of regard to it. I am not present informed who is the setter forth of this malignant writing, but if he is found out, he shall be straitly punished for it. For things ye lacked, I have minded my lord to supply them to you as soon as he could buy them. Thus, hoping shortly to receive you into these arms, I end for the present, your own loving servant and sovereign,