The Fall of Anne Boleyn (Day 1): The Last Day of Freedom 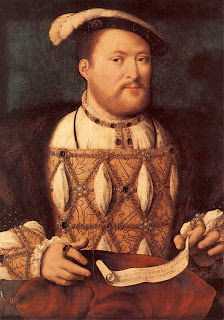 "Sitting next to one another, Henry VIII and Anne Boleyn still cut an attractive – even a magnificent – pair. Admittedly, the King was no longer the “perfect model of manly beauty” that he had been when he came to the throne twenty-seven years earlier, but neither had he degenerated into the monstrous, sweating man-mountain of his later years. In 1536, the muscles on the 6ft 2ins monarch were only just beginning to turn to fat; with the boyish good looks gone but the repulsive obesity still some way off, the 44 year-old King looked every inch the absolute monarch."

Today is the anniversary of Anne Boleyn's last public appearance as a free woman. For the full anniversary post, click HERE.
Above: A portrait of Henry VIII painted by Joos van Cleeve sometime around 1533, when the King was forty-two years old. In his hand, he holds an extract from the Gospel according to Saint Mark.
Posted by Gareth Russell at 12:56

Labels: The Fall of Anne Boleyn