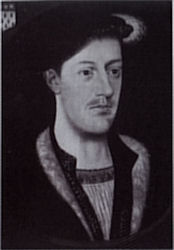 Above: A portrait that may be a representation of Sir Francis Weston, a twenty-five year-old knight accused of being one of Queen Anne Boleyn's lovers in 1536.

"Built during the reign of King William Rufus, who had ruled England from 1087 until 1100, the Hall would now play witness to one of the most extraordinary and shameful trials in British history. Thomas Howard, 63 year-old Duke of Norfolk, sat as presiding judge and the King's representative over the four men accused of having committed treasonous adultery with Queen Anne Boleyn. According to the indictment created by the Grand Jury of Middlesex who along with the Grand Jury of Kent had jurisdiction over the trials (they were the closest two to London and thus the easiest to control and organise from the Crown’s perspective), the men had been partners in the Queen’s “frail and carnal appetites” and insultingly referred to them as “her adulterers and concubines”. Grim-faced and self-righteous, the Duke ordered the trial of the four men who had dishonoured their king to begin."

For this blog's account of the trial of the four men, click HERE.
Posted by Gareth Russell at 23:25