The Fall of Anne Boleyn (Day 15): The Queen's Trial 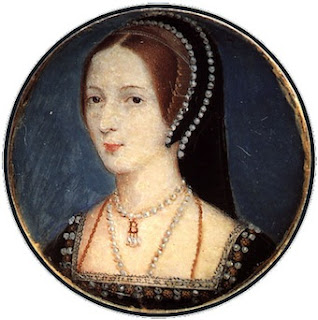 "On May 15th 1536, twenty-six peers of the realm congregated in the King’s Hall of the Tower of London to serve as judges in the trial of Anne Boleyn, Queen of England... In the centre of the Hall, a chair had been placed on a raised platform before a bar. Nearby, glistening in the light was the Queen’s crown – probably the one made of gold and decorated with sapphires, rubies and pearls with crosses and fleurs-de-lis around the rim, which the Queen had ordered for her coronation three years earlier. In the specially constructed stands placed all around the Hall, two thousand of the citizenry of London had gathered to watch. Their hubbub died away as the Crown’s commission was read aloud and the Duke of Norfolk announced,"Gentleman Gaoler of the Tower, bring in your prisoner."

The Queen entered the room, accompanied by the Yeoman Gaoler of the Tower, carrying his axe, with its blade turned away from her face to signify that she had not yet been condemned. Dressed elegantly in a gown of black velvet with a crimson damask petticoat, and small cap with black and white feathers, the Queen bore all the hallmarks of her education as an honorary member of the French nobility – elegant, sophisticated, imperious and very grand. Behind her followed her remaining ladies-in-waiting, headed by the wife of the Constable of the Tower, Lady Kingston, and the Queen’s estranged aunt, Lady Boleyn, who led four young women of the Queen’s own disbanded Household who had, finally, been allowed to join her in captivity. Watching this procession, the French Bishop of Riez, ensconced in the viewing gallery above, was impressed by the Queen’s behaviour: "She walked forth in fearful beauty," he wrote later, "and seemed unmoved. She came not as one who had to defend her cause, but with the bearing of one coming to great honour.""

For an account of Anne Boleyn's dramatic trial, within the precepts of the Tower of London, click HERE.


Above: A seventeenth century miniature of Anne Boleyn painted by John Haskins, believed to have belonged to the royal collection of King Charles I (r. 1625 - 1649.)
Posted by Gareth Russell at 21:24