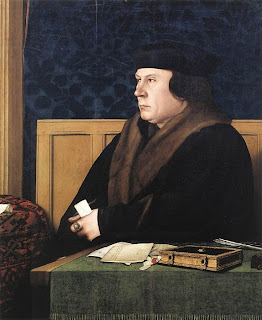 "In his study at Westminster, Thomas Cromwell was beginning to feel the pressure of the case against the Boleyns. His visit to the Tower two days earlier, coupled with the daily reports coming in from Sir William Kingston, must have shown him that whilst the Queen had wobbled, she had not cracked like they might have hoped. The tactics of surrounding her with unfriendly faces, withholding information about her friends and family, refusing to give her the full details of what she would be tried for and denying her access to her own servants had certainly upset and occasionally infuriated her, but it had not made her any more afraid of the government, or inclined to co-operate. If anything, she seemed to be taking it as some kind of challenge. There was also the issue of the logistics of the trial - only Cromwell, and possibly Sir William Fitzwilliam, knew the full details of what was true and what wasn't and so it was vital that he kept on top of things. The trial of Sir Henry Norris, Sir William Brereton, Sir Francis Weston and Mark Smeaton were due to take place on Friday and the Grand Jury, the evidence, the alleged dates of their adultery and treason, all needed to be arranged without drawing too much attention to the gaping holes in the Crown's case. Cromwell also had a rising tide of public disapproval about the Queen's imprisonment to quell and various pamphlets lampooning both the King and Jane Seymour were beginning to circulate in the city; if the King found out, he would be furious. And added to all this, Cromwell also had to continue fielding the dozens of letters arriving asking that when the money and jobs of the Queen's so-called lovers were divided up, Cromwell would use his "good mediation and furtherance" to help his friends and supporters, all of whom were now declaring their inviolable loyalty to him in the same fulsome terms they had once used in letters to Anne Boleyn."

This blog's look at the upper-class reaction to the Queen's downfall and the opportunity it presented for the lands, titles and fortunes of her alleged lovers to be carved up amongst Thomas Cromwell's supporters. Click HERE.


Above: Hans Holbein's portrait of Thomas Cromwell, Henry VIII's chief adviser for most of the 1530s, and who organised the logistics of the Queen's downfall. Historians are still divided today about what role he played in the events of May 1536 and if deposing Anne was his own idea or whether he was simply following orders.
Posted by Gareth Russell at 15:53