The Fall of Anne Boleyn (Day 10): The Queen's Brother 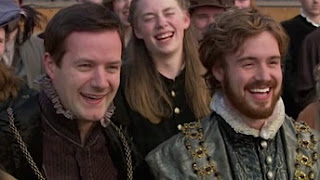 "32 year-old George Boleyn, Viscount Rochford, currently being held in the Martin Tower of His Majesty’s Tower of London, on a charge of incest with his younger sister, Queen Anne Boleyn, had been – until his arrest eight days earlier - a generally well-liked figure at the royal Court. Tall, muscular, wealthy, powerful, funny, confident, intelligent and impossibly handsome (the comparison to Adonis has been made before), it was difficult not to like him, at least on first impressions..."

Click here to take a look at my post "My Lord of Rochford's conscience," examining the imprisonment of George Boleyn on the charge of incest with his royal sister.
Above: (Left) Padraic Delaney as George Boleyn in the Showtime series The Tudors, opposite Jamie Thomas King as Sir Thomas Wyatt.
Posted by Gareth Russell at 19:51