The Fall of Anne Boleyn (Day 19): The Last Curtsey 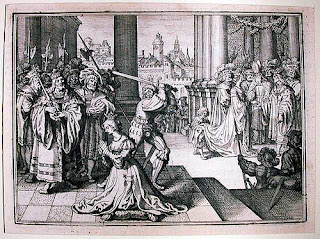 Above: A later woodcut showing Anne Boleyn's execution in the French style. In the corner, the artist depicts the betrothal of Henry VIII to Jane Seymour within the next twenty-four hours.

"So here he was – the last man in her life. In her time, she had known men of great faith, men of towering intellect, of compassion, purpose, charm, chivalry and sangfroid; she had also known men of cruelty, of ego, ruthlessness, duplicity, hypocrisy and vice. There had been men who had loved her, men who had hated her, men who desired her, men who feared her and there had been men who had done all four. Now, at the very last, it was this complete stranger who was to participate in the final tragedy of Anne Boleyn and to give her a death that would buy for her an immortality that many other queens might envy. Looking at him, Anne saw a quiet, respectful angel of death, a man a million miles removed from the macabre, gothic fantasy of a leather-clad, mask wearing exterminator; he, for his part, saw a fragile and rather lovely young woman, who no more looked like the strumpet, the harpy or the harlot than his wife, his sister or his daughter."