The Fall of Anne Boleyn (Day 13): The Disbanding of the Queen's Household 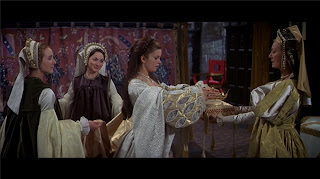 "She had surrounded herself with socialites and priests, poets and philosophers, rogues and prudes. Evangelicals had knelt as she passed and wept, proclaiming her to be the new Deborah, the new Esther, God's Nymph; ambassadors had leaned in to present her with gifts and assure her that their masters sent nothing but the very best of wishes; petitioners and peasants had kissed the hem of her skirt as she passed; poets and musicians had sighed in the most exquisite agony to receive so much as a glance from her and women in silks and diamonds and pearls whispered delicious intrigue in her ears."

On May 13th, eleven days after her arrest, the government formally dismissed the two hundred servants who had constituted the household of Anne Boleyn. For the full account of the end of an era, click HERE.

Above: Anne Boleyn (in an Oscar-nominated performance by Geneviève Bujold) with her ladies-in-waiting in the 1969 Oscar winner, Anne of the Thousand Days.
Posted by Gareth Russell at 00:18