The Fall of Anne Boleyn (Day 18): Preparing to die 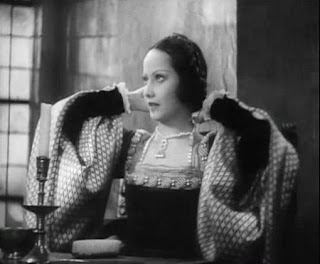 Above: British actress Merle Oberon in the role of Anne Boleyn in the Oscar winning The Private Life of Henry VIII (1933.)


"... As London slumbered and the summer stars twinkled over the head of the vast metropolis where so many of her family's triumphs had once been celebrated, the remarkable life of Anne Boleyn was drawing quietly to its close. All that was left were the events of the morrow, which would ensure that as her life ended, her legend began and the story of Anne Boleyn would thus commence its long, powerful course through British culture, history and national myth, carrying with it potent, intoxicating images of love, betrayal, lust, drama, religion, obsession, death, hope, deceit, power, wealth, tragedy and the final blood-soaked finale on the Tower Green."

May 18th was the last full day Anne Boleyn spent alive and I blog about it, HERE.
Posted by Gareth Russell at 21:45