The Fall of Anne Boleyn (Day 17): "The executioner was weeping" 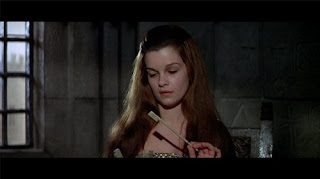 Today in history the five men accused of being Queen Anne Boleyn's adulterous lovers were publicly executed on Tower Hill in London. For a full account of the executions, click HERE.

"As Wyatt wrote and the Queen wept, the city buzzed with the news of what had just happened. In Vienna, the Empress Isabella heard later that the bodies of Mark Smeaton and William Brereton were quartered and displayed around London, to advertise their hateful treachery in violating the Queen. Perhaps the Empress’s informers were correct, but if they were, at some point the heads at least must have been returned to the Tower for burial in the same churchyard that Henry Norris and Francis Weston now lay in. It was a poor and ignoble resting place for such men - particularly Henry Norris. As an aristocrat, George Boleyn’s body was taken into the Chapel of Saint Peter-ad-Vincula and interred beneath the High Altar where, forty-eight hours later, his body would be joined by that of his royal sister.

It had been a grim, hideous, bloody day even in the long grim, hideous and bloody reign of Henry VIII and it is not difficult to see, when one considers the dark, terrible and repugnant events of May 17th, why Charles Dickens would later describe Henry VIII as a spot of blood and grease on the pages of English history. For the Queen, all that was left now was to die and die well."

Above: Actress Genevieve Bujold in the Oscar winning biopic Anne of the Thousand Days (1969.)
Posted by Gareth Russell at 20:49