The Fall of Anne Boleyn (Day 6): The Queen's Last Letter? 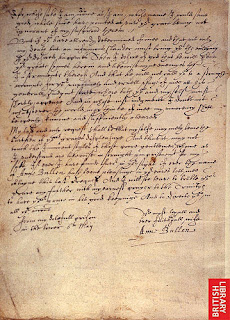 Reading back over my post from last year, when I analysed the debate over whether or not the letter (above) allegedly written by Anne Boleyn to the King on the fourth day of her imprisonment, I think perhaps that I should have been slightly harder on it. I still agree fundamentally with my conclusion that there probably was a letter, but that it's since been lost or accidentally destroyed. However, I think I was wrong to suggest that the May 6th letter probably contains authentic sayings from a lost-original. I tend to agree now that it's either entirely genuine (extremely unlikely) or a complete, if sentimental, forgery. And in the comments section for the original post, many thanks to Little Miss Sunnydale for putting forward Professor R.M. Warnicke's theory about how such letters were forged in Elizabethan school rooms. I think it's an excellent theory and could potentially explain a lot about the letter's origins. To quote from my original article: -

"The letter's authenticity has been the subject of debate therefore since the earliest days of Tudor historiography. Writing his biography of Henry VIII in 1649, Lord Edward Herbert believed it was probably a forgery, perhaps penned by a pious devotee of Anne’s sometime in the reign of Queen Elizabeth; on the other hand, Gilbert, Bishop of Salisbury, writing his 7-volumed History of the Reformation of the Church of England thirty years later was convinced that it was genuine. Having spent a lifetime compiling the Original Letters of Henry VIII’s reign in the mid-19th century, the archivist Henry Ellis positively gushed about the letter’s style, panache and validity and pointed out that there were always some alterations in Anne Boleyn’s handwriting depending on her mood. There are, for instance, considerable differences between the letter she wrote to her father from the Hapsburg Empire in 1514, that penned to Cardinal Wolsey after the plague epidemic of 1528 and one she dispatched to her friend, Lady Wingfield, in the summer of 1532. The unsentimental and sombre giant of Victorian historians, J.A. Froude in his The Divorce of Catherine of Aragon and History of England, accepted Ellis’s arguments and believed that all clear documentary evidence pointed to the letter being authentic."

For the full post I wrote last year discussing the debate over whether the letter is real or not, click HERE.
Posted by Gareth Russell at 17:40