The Fall of Anne Boleyn (Day 5): The Arrest of the Gentleman Poet 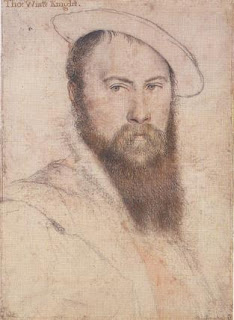 Above: An incomplete sketch by Hans Holbein the Younger (d. 1543) believed to show Sir Thomas Wyatt the Elder (1503 - 1542), a Tudor courtier, diplomat, politician and adventurer, who is perhaps best known nowadays for being one of sixteenth century England's most influential poets. He was arrested on May 5th, 1536 under apparent suspicion of being Queen Anne Boleyn's sixth lover. He was a close friend of her brother, Lord Rochford, "a tall, muscular, multi-lingual Oxford graduate with a passion for poetry, power and Protestantism," who was also currently a prisoner in the Tower.

"... Sir Thomas Wyatt, was a 32 year-old poet, who had known the Queen since her arrival in England as a debutante fourteen years earlier. His sister, Lady Lee, was one of the Queen’s chief ladies-in-waiting and in the days before she had come to Henry VIII’s attention, Wyatt had apparently been in love with Anne Boleyn, “this new beauty.” By the accounts of all those who actually knew them, this love was unrequited and we have some haunting poetry from that time expressing Wyatt’s pain at the situation. Upon hearing of Anne’s betrothal to the King, he had returned to his rooms, packed his bags and gone to Italy for several years on a diplomatic mission to the Vatican. The kind of overblown and melodramatic gesture one might expect from a poet and an indication of why he made so many women go weak at the knees - all except Anne, of course, and his own wife, who openly despised him."

For this blog's full account of the day on which Wyatt was arrested and escorted to the Tower, click HERE.
Posted by Gareth Russell at 01:02