The Fall of Anne Boleyn (Day 3): The First Day in Prison 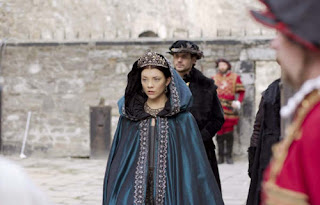 Today marks the anniversary of the first full day that Anne Boleyn spent as a prisoner in the Tower of London.

"The last time she had frequented these palatial Tower rooms, Anne had been on the cusp of her greatest triumph and the rooms had played host to a series of elaborate parties to celebrate. The Queen’s audience chamber, her dining room, her bedroom, her bathroom and her private oratory were all as she remembered them – the last word in luxury and style. However, this time there were no flashing jewels and smiling faces as the Queen entered the apartments, instead only the grimly disapproving faces of those who had been assigned to watch over her throughout her captivity."

Above: British actress Natalie Dormer as Anne Boleyn in Season Two of the Showtime series The Tudors.