The Fall of Anne Boleyn (Day 16): Preparing for the Queen's Murder 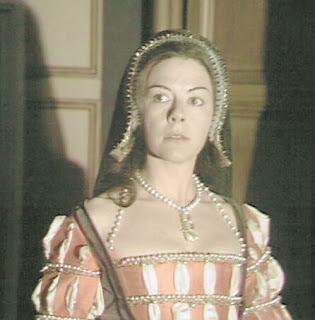 "On the morning of May 16th 1536, Sir William Kingston, Constable of the Tower of London, arrived at the Palace of Whitehall for an audience with the King. Being one of the few people allowed into the King's presence during the period of his wife's imprisonment, the Constable made his way through the opulent and recently re-furbished corridors of the palace which had once belonged to Cardinal Wolsey and then to Anne Boleyn. If ever there needed to be a more potent reminder of the turning of Fortune's wheel, then it lay in the gilt and marble corridors of Whitehall."

With the trials of the Queen and her co-accused now completed, the government began to make arrangements for the executions.  Click HERE for my full account of this, including an interview between Anne's husband and her gaoler.
Above: British actress Dame Dorothy Tutin in the role of Anne Boleyn in the BBC television series The Six Wives of Henry VIII (1970.)
Posted by Gareth Russell at 18:13

Labels: The Fall of Anne Boleyn